Thank you for your patience while we retrieve your images.

Identification documents are official documents that validate who an individual purports to be. The authenticated information states that the bearer is the person documented. These documents communicate information of the bearer that is so mundane and menial that even with the photograph accompanying the text, it does not really tell you anything about the actual individual; only unsuccessfully describing the exterior qualities.

The portrait alone is not deemed sufficient confirmation of identity. Accompanying text is required to validate the person in the photograph. The photographic portrait claims, by convention, to refer to somebody and to make that person present and yet the identification documents do exactly the opposite, they evoke absence. The ID document states details of ones identity, an identity that is not fixed, that is changeable to the extent that the document is valid. Expiration of the document becomes the death of the deeds and portrait, a memorial to the identity that once was.

This series, of four appropriated expired passports, play on the Western fantasies of the Eastern female. In the photograph she has taken on the physical identity of Western stereotypical females from the Silver screen. Much like Cindy Sherman who impersonated different stereotypes of women in her Untitled Film Stills, these images show Western influence on Eastern women. Whether conscious or unconsciously they mould themselves in to the Western iconic female figures of the 1970’s and 1980’s. The female figures, strong, independent women, a contrast of the Eastern women.

The subverted document takes on a new lease of life, no longer the authoritative official document but the representation that fulfills the desire of the female, of how she sees herself.

The new document, the photograph and new text begins a new existence in the transient cycle of identity documentation. 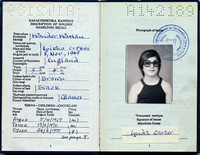 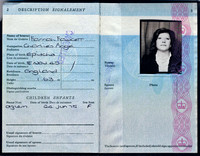